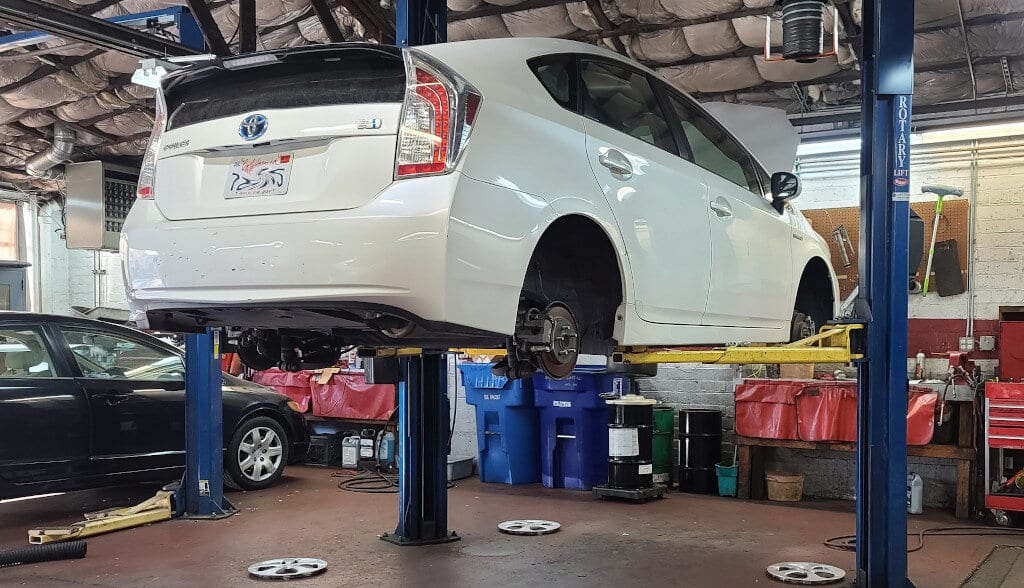 What can go wrong with a Prius?

The Prius is a great car. In fact it’s my favorite car. It’s not really fun to drive, but it’s practical, economical, and over all, very reliable. Prius repair is what I do best, and if I had a choice, I’d prefer a Prius in my bay over any of the other cars we repair. However, as great as it is, the Prius, like any car, will occasionally need repair. People frequently ask my what can go wrong when they’re considering buying a new or used Prius, and that’s what this article is about. What repairs might come up if you buy a Prius.

Cars models are broken into generations. A generation usually lasts 4 or 5 years and all of the cars are more or less the same. Then Toyota will release the same car with a major redesign, and it’s like a completely different car. For this reason, I’ll be making a section for each generation of Prius.

We aren’t taking any new customers with Gen 1 Prius. Is it a bad car? Absolutely not. But it is 17-20 years old now and most of them are in pretty poor condition. If you’re interested in why, you can read our “Why won’t you work on my car?” article for an explanation.

The Gen 1’s primary issues were:

All of these, except the no-start problems, are expensive to repair, and the cost exceeds what most Gen 1 owners are willing to spend on their cars.

The Prius got a lot better with the next generation. More power, better mileage, and depending on who you ask, the hatchback was a nice improvement. The Gen 2 also needed fewer expensive repairs. Batteries do fail, but usually when they’re around 12 years old. Transaxle MG2 issues are now also pretty rare. Toyota added a resolver to the electric power steering torque sensor so the steering is now very reliable. They still had some issues with debris falling into the MAF sensor causing a no-start, usually right after a quick lube place checks the air filter. Ignition coils still fail occasionally, but it just causes a misfire rather than a no-start.

The do have there own set of issues though:

All of these repairs are fairly expensive, but all cars have pattern problems (with the possible exception of the bulletproof Corolla). None of these are reasons not to buy a Gen 2. Most Gen 2 Priuses have already had the battery replaced and the second battery should last another 12 years. However, if the Prius has a “rebuilt” or aftermarket battery, assume you’ll need to replace it again when deciding how much you’re willing to pay for the car.

The problems with the Gen 3 Prius aren’t as frequent as the problems with previous generations. We see maybe 2-4 head gasket failures per year. Around 4-6 inverter failures, many of which were still under warranty. And I only remember one instance of an intake manifold problem. There’s a service bulletin for the intake manifold causing misfire codes, and the intake manifold is often blamed, but I’ve found that misfire codes are usually caused by an ignition coil or head gasket leak. By the way, I didn’t list ignition coil as a pattern problem because coil failure isn’t any more frequent on the Prius than it is on any other car.

Toyota is continuing with the pattern of improvement. Even better power and fuel economy, with many people getting a real world 60 MPG, which is really impressive for a car this size. So far, the Gen 4 has been rock solid. They do have the advantage of still being fairly new though since 2016 was only four years ago. What’s really strange to me is that Prius sales have increased with every generation, peaking in the middle of the 3rd generation at about 237,000 units sold in the US. Now, after Toyota has seemingly perfected the car, and made a Prius that rarely needs repair, sales tank. 70,000 units in 2019 and only 36,000 near the end of 2020.

Which Prius Should You Buy?

You should buy the newest Prius you can afford. Each generation is better than the last and newer cars with less miles will usually need fewer repairs than older cars with more miles. The amount you spend repairing your Prius will be about average for a Japanese car, which is a lot less than it would be for an American car or European car.