Every person has a tipping point, when an auto repair expense is just a little to high to justify. And let’s face it: a newer car is usually going to be more reliable, be safer, have lower emissions, and have more features. While fixing your old car is almost always the cheapest option, your time, …

This is a problem we address every few months. Usually a new driver borrows a car and does the responsible thing – fills it up before returning it to the owner. Which nozzle to use? Well, the green one looks good. Oh, no! They added diesel fuel to the gas tank! They’ll usually manage to …

Converter Theft is out of control Having your catalytic converter stolen is bad luck. Having it stolen 4 times in a row? Well, that’s living in Berkeley with Gen2 Prius. That’s exactly what happened to one of our customers. In case you’re thinking of blaming the victim and saying, “Well everyone knows Prius converters are …

Why do Subaru Lug Studs Keep Breaking? The Problem With Subaru Lug Nuts  Occasionally a lug nut gets stuck and the lug stud snaps off when you try to remove it. This is a normal part of auto repair. Sometimes it’s because the car came from somewhere with snow and salt. Or it might be  …

The real cost of ignoring an ABS light When money’s tight, ABS lights tend to be ignored. Unlike the check engine light, California doesn’t require these systems work in order to re-register your car. As long as you’re not polluting the environment, you’re welcome to endanger yourself and others. But are you? Endangering others that …

My Prius doesn’t turn off when I press the power button The 2004-2009 Prius has a common issue that can make it impossible to turn the car off in the normal way. Here’s how you can turn your Prius off if this happens to you. Insert the Smart key into the key slot in the …

Are we regressing? I’m kind of shocked that this is a point of debate in our industry. For years nearly every shop has automatically replaced the rubber valve stems when replacing a tire. The reason is simple: a bad valve stem can cause the tire to go flat, and a customer isn’t going to differentiate …

How to decide what to do when your car overheats Overheating is really bad news and can quickly cause serious and costly damage to your motor. When is it safe to let the car cool down and drive to the shop and when should you call a tow truck? What you decide can mean the …

Some of the least common services and repairs cost the most to equip for Tooling up to be able to offer all of the same services as a dealership is expensive. Most auto repair shops are content to provide around 90% of the services and refer the car back to the dealership when it needs …

This falls under the “really old news category”, but I’m writing it for a reason. I just had a customer call in to schedule a 5K service because her maint req light was on. When I checked her file, we had just done a service about 2,000 miles ago. Oops! I know, it’s lame. Anyway, …

I told you so! Anyone who has asked me which low-cost used cars are good will recognize this list. While I don’t agree with everything Consumer Reports about everything, in fact I think they’ve made a couple small errors in this selection, I do think they got it right overall. There may be a bit …

Home Toyota Care sounds like a really good deal and is a major selling point for some people. ToyotaCare is a “free” maintenance package that comes with all new Toyota cars. It includes 25,000 miles of free maintenance (sort of), and 24 hour roadside assistance (sort of). There’s no reason not to get Toyota Care. …

How Much Does a Converter Cost? “How much does a Prius converter cost?” It’s a very popular question right now, unfortunately. People call, mostly in the morning, to ask this question when they wake up and find their Prius is very loud all of a sudden. Then I get to ruin their day with the …

.Now that we’re finally nearing the end of the shelter-in-place, and more people are starting to go back to work, many are finding their car won’t start. We’re getting a lot of calls every morning with this complaint, so I’m going to offer a little guidance in this short post. What kind of no-start? First, …

The good news is that we’re now seeing a lot of the cars that we’ve installed our Prius catalytic converter anti-theft device on come back, with the converters still under the car. Why would we see them again if the converter isn’t stolen? Well, thieves aren’t the brightest, and they often don’t notice the anti-theft until after they’ve done some damage. They may cut the O2 sensor wires, cut the pipe, and unbolt flanges, but when they try to remove the converter, they find they can’t.

The thieves are still plying their trade and we’re still seeing 1 -5 per per day. A person or two is arrested here and there. A man was crushed to death in Berkeley. Still, the problem continues. 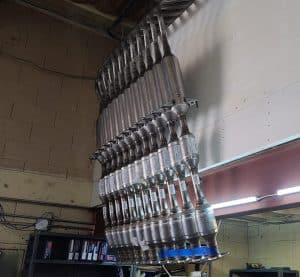 The O2 sensor wiring on this converter was cut. The sensor is a $184 part, and removing the connector under the passenger side carpet takes a bit of time. However, we can repair the wires to avoid replacing the sensor, saving some money.

Unfortunately the wires in the O2 sensor pigtail are marine-grade nickel plated stranded wire, which is hard to solder, even with flux.

Crimp connectors work just as well, but standard insulated crimp connectors will let water in and even with marine grade wire, water and salt isn’t great for connections, so we’ll need to seal these up.

Double wall heat shrink tubing forms a watertight seal and will protect the connectors from the elements.

If a thief tries to cut the O2 sensor wires again, he’s in for a surprise. We’ve zip-tied a piece of hardened cable along side the wires. The wires may still be damaged, but his side cutters will be damaged as well. And if this is his first step, maybe he’ll realize the converter won’t be coming off very easily. 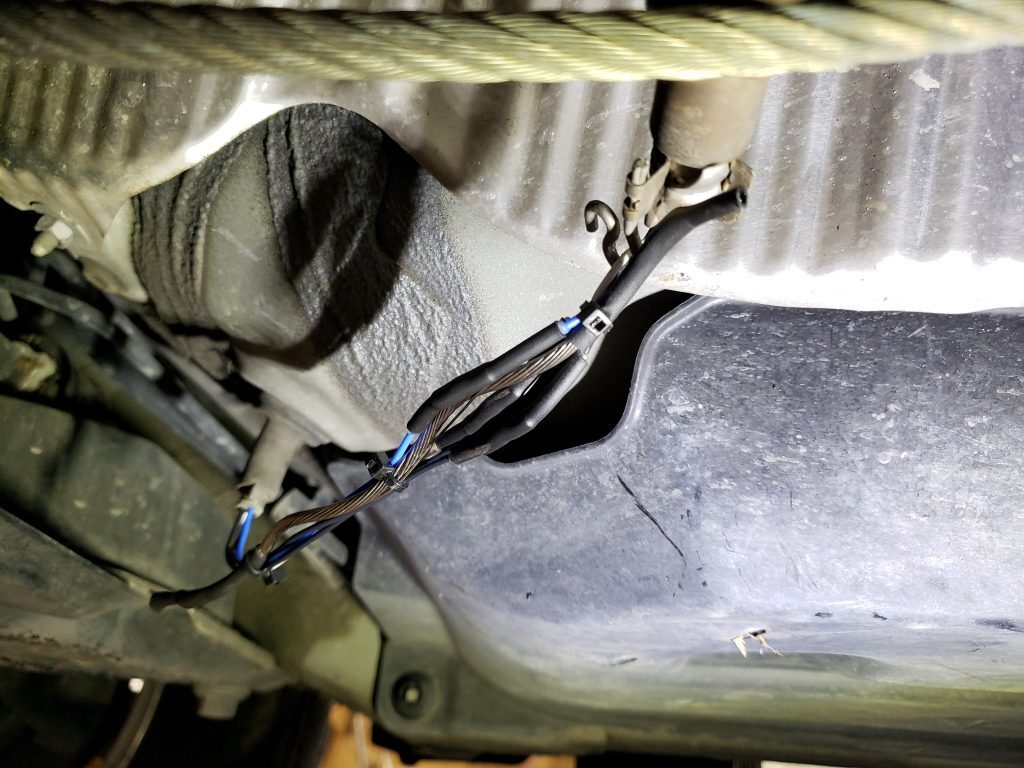 Some flexible conduit will help protect the wires from abrasion and hide our little surprise. Orange is the color code for high voltage, maybe that’ll deter some of the more knowledgeable dirtbags, probably not many of those though. Perhaps just the fact that it looks different will give them pause. One can only hope.

You may be familiar with the “wayback machine”. If not, you should be! It’s an archive of the internet. Yep, the whole thing. For how long? You guessed it — way back. Anyway, as I was updating our website and and proudly showing off my work, one of my co-workers said, “I dunno. Looks OK …