Is jump starting a Prius Different than a “regular” car?

A Prius can be jump started, just like any other car, but there are a few things that you should know. First, the 12V battery is in the trunk instead of under the hood. This wouldn’t be much of an issue if you could open the trunk when the battery is dead, but you can’t. The trunk uses a switch and an actuator to release the latch. Without battery power, it won’t work and you won’t be able to open the hatch. Not only that, but the smart key won’t work. It needs 12V power too. This short article will explain how to overcome these obstacles and jump start your Prius.

A Prius jump start isn’t without risk. No, there’s no shock danger. However, like any car, if you connect the cables backwards, the main fuse will blow. Unlike most cars, the DC/DC converter will sometimes fail after a reverse polarity jump start, and you don’t want that to happen.

How to get cables to the battery terminals

You’re in the car. What now? The battery is in the trunk. You could slither your way back to the trunk, but if you try to remove the battery cover you’ll likely break it. In fact quite a few Gen2 Priuses that come to the shop with broken battery covers because someone didn’t know about the jump start terminal under the hood.

On the 2004-2009 Prius, a jumper port is located in a fuse behind the driver’s side headlight. Look for a small red cover and flip it up to reveal a positive terminal connected to the battery in the back of the car. Connect the positive jumper cable clamp to that. Connect the negative clamp to any metal part of the engine. I like to use the inverter cover. (That’s the dusty aluminum thing I’m pointing at below) 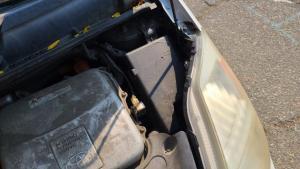 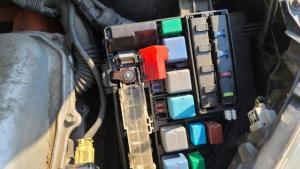 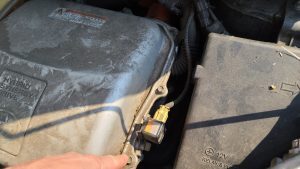 Often the 2004-2009 Prius will get a little confused after loss of voltage. The gas gauge will blink on empty for a while. This is normal. Something that causes more problems for people is the park lock system. There will sometimes be a message something like, “Park your vehicle on level ground and apply the parking brake”.

The Prius has an electronic parking pawl. On a car with a shift lever, when you move the lever to the park position a cable moves a rod in the transmission that stops the output shaft from turning. On the Prius, there is no lever and no cable. When you press the park button, there is an electric motor in the transmission that moves a rod to stop the output shaft.

This motor “learns” its position by moving all the way one way, then the other. If the voltage gets low, as happens when the battery goes dead, it can get stuck mid-travel and will need to relearn its position. To help it relearn, press the park button, then shift to neutral with the car in the ON position (press the power button twice without stepping on the brake pedal). The booster cables should remain connected during this procedure.

Keep doing this and it will eventually figure it out. The car can’t Ready until this is complete. People usually complain that their Prius “won’t go into gear”. This is because the car is ON, not Ready

The 2010-2015 Prius has a jumper port in a similar location. Same deal. Remove the black plastic cover. Flip up the red terminal cover. Connect the positive clamp to the terminal and the negative clamp to any metal part on the engine. I like to use the inverter.

Hey, you skipped a bunch of model years!

If you own a 2001-2003 Prius, or a 2016 or newer Prius, the jump start procedure is pretty much the same as a normal car. The 2001-2003 Prius has the battery in the trunk, but it has a regular mechanical trunk lock you can open with a key, so there’s no need for electrical power to open the trunk. The battery cover is easy to remove without any tools. It’s on the driver’s side of the car.

The 2016 and newer Prius has the battery under the hood, so you’ll just need to use your smart key emergency insert to open the door and the hood release to open the hood.

Good luck, and I hope you get to work on time. Since your Prius needed a jump start, the 12V battery may be bad. You should have it tested to find out.