I’m kind of shocked that this is a point of debate in our industry. For years nearly every shop has automatically replaced the rubber valve stems when replacing a tire. The reason is simple: a bad valve stem can cause the tire to go flat, and a customer isn’t going to differentiate between a flat caused by a old valve stem and a problem with the new tire. The industry as a whole, long before I became a member, decided that if a new tire was installed, a new valve stem would be installed as well.

At first, almost every shop was doing the same thing

Resealing a TPMS sensor on the other hand is less convenient replacing a rubber valve stem. The sensor reseal kits usually cost 10 times more than a rubber valve stem, so customers notice the increase in cost. This can make a set of tires look very expensive when compared to a quote that doesn’t include reseal kits. Then there’s the matter of stocking all of the TPMS reseal kits. Four sizes of rubber valve stem cover 90% of the applications. We stock over 20 different TPMS sensor reseal kits and it still doesn’t cover every model we repair, and we only repair a few makes of cars. Regardless, nearly all shops were faced with the same issues and everyone was doing the same thing, so the playing field was level.

Then some shops decided to start cutting corners

When TPMS first started showing up, most shops were removing the sensors and dropping them into the tire before removing the tire from the rim, primarily to avoid breaking the sensor. The rubber seals are one-time use, so just about everyone was installing new TPMS sensor seals every time a tire was removed. Fast forward a few years and now shops are all doing different things. There are four common options:

Leaving the sensor in place has become a popular option. I’m not a fan of this policy, and here’s why. First, it’s easy to break the sensor on the tire machine while changing the tire. Although it is true that mechanics have figured out how to avoid damaging the sensor most of the time. If one in 100 sensors breaks, they’ll still come out ahead. The second danger is old rubber seals leaking. This is why the industry as a whole decided that rubber valve stems should be replaced every time, and why I think replacing TPMS seals every time ought to be the industry standard. A shop willing to take these risks can offer a cheaper price to their customers while simultaneously making a higher profit. Will consumers see the difference in value? Probably not.

For shops worried about breaking TPMS sensors, but who still want to make more money, there’s the option to remove the sensor and then install it with the original seal. This is, by far, the stupidest option. We had a car come in with 3 of 4 tires leaking from the TPMS sensors and a brand new set of tires. The sensor seals were obviously reused. 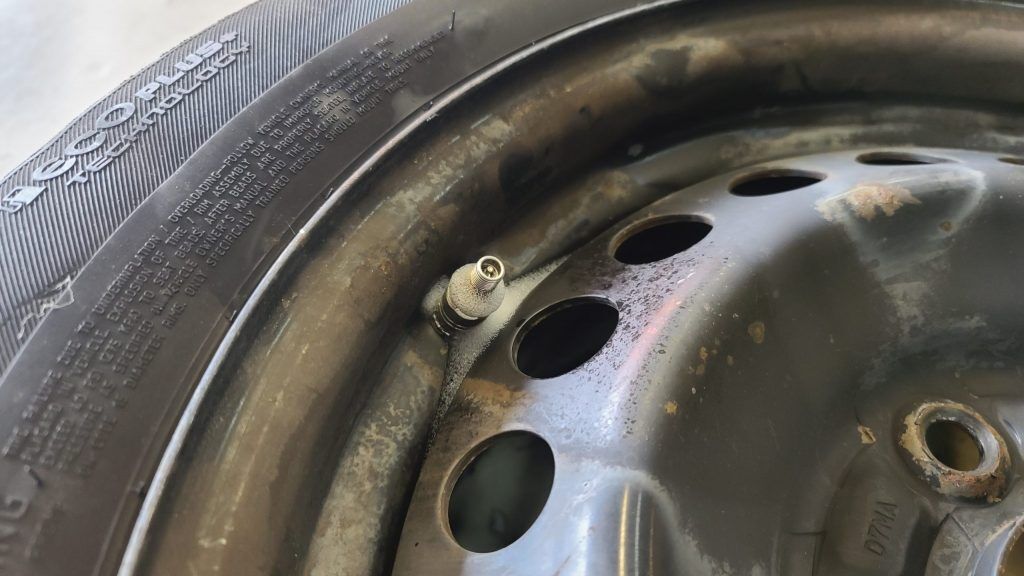 Replacing the whole sensor. Is it a ripoff?

Installing new TPMS sensors may not be a bad idea, depending on how quickly a customer is replacing tires. If a car is used as an Uber and is getting a set of tires every year or two, there’d be no point in automatically replacing the TPMS sensors with every set of tires. TPMS sensor batteries typically last 5 – 8 years.

We have more than a few customers that only drive 6,000 miles a year. Would it make sense for them to replace the TPMS sensors every time they replace the tires? It think that it would, since it would take them almost 8 years to wear out a set of tires.