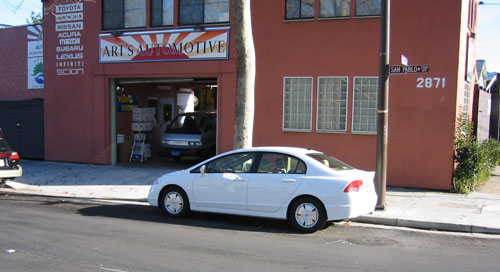 This is a very slick looking car. The 2006 Civic has 26 more horsepower than the 2005 Civic and it’s only 143 lbs. heavier. That’s power to weight increase of 25%! It’s mid 2007 now, and we have 15 customers with this generation Civic hybrid compared to 160 Prius customers. They just aren’t selling that well. The Prius, with the same “old” body style from 2004, is clobbering the new Civic hybrid. It could be the that the Prius did better on the EPA mileage test, or it could be that the Prius is heavily advertised and I’ve *never* seen an ad for the Civic hybrid. Either way, Honda had better step it up soon if they don’t want to go back to making piston rings for Toyota. OK, an extreme overstatement. Just trying to motivate Honda. It’s just not fun watching my two favorite rival automakers compete when one winning by such a wide margin.

What can go wrong:

Nothing so far. There was a recall to reroute a DC to DC converter cable, but that’s about it. They are all still low mileage and under warranty.

The 2006 – 2007 Civic hybrid is able to capture more energy during regen braking than the 2003-2005 Civic owing to two improvements. One is the addition of a Prius style “fake brake”. The Civic is no longer just doing regenerative deceleration (as I like to call it), it’s doing real regen braking, more like the Prius. The other improvement to regen braking is that the VTEC system closes *all* of the valves, rather than just valves for 3 cylinders like the 2003-2005. This decreases the amount of braking energy absorbed by the engine and allows it to be captured for charging the battery.