This is our recently redesigned parts room. I wish I had taken a “before” picture for contrast. It’s hard to describe how messy it was becoming without pictures, but let’s just say we were beginning to suffer an unacceptable level of inventory loss due to trampling damage. 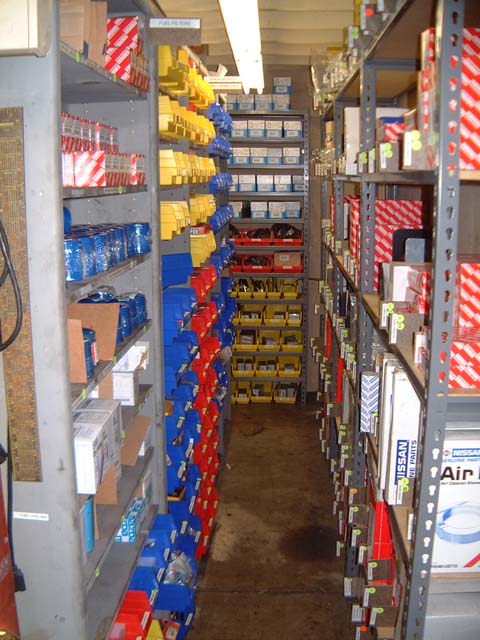 This is the first aisle. You may notice that most of the parts we stock are either Genuine, OE, or OEM.

Genuine means if the part is for a Toyota, it comes in a Toyota box.

Original Equipment Manufacturer, means the manufacturer of the part provides parts for use in new cars. They may even have provided parts for use in your new car. However, they did not provide the this specific part for your car. 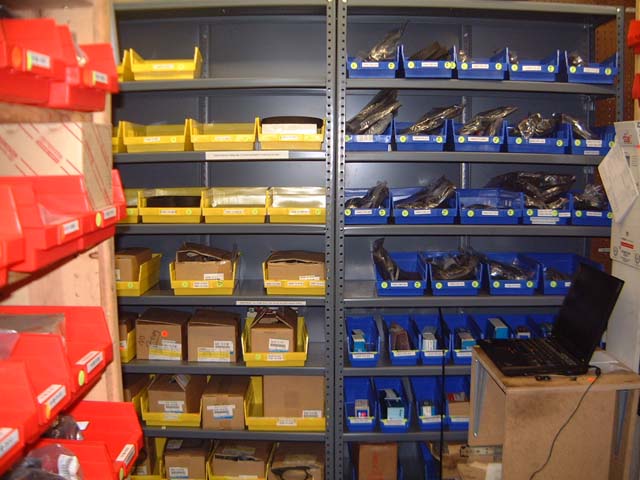 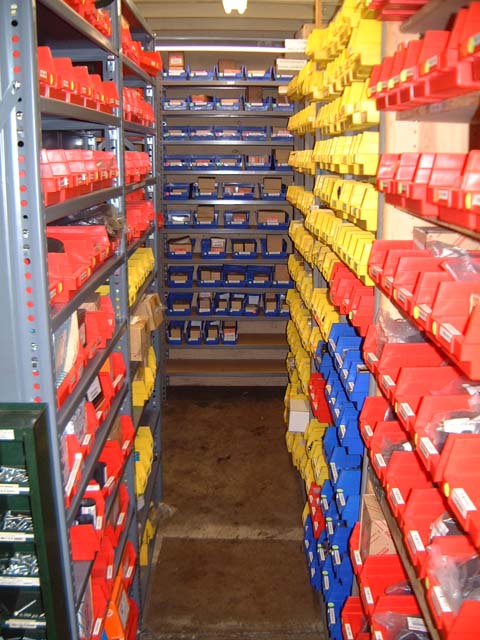 Not everyone agrees on these definitions. Many mechanics will say that OE is synonymous with Genuine. Or OE and OEM mean the same thing. These are our definitions, based on definitions that our major suppliers use. Put forth in an effort to explain where the parts we use in your car come from. 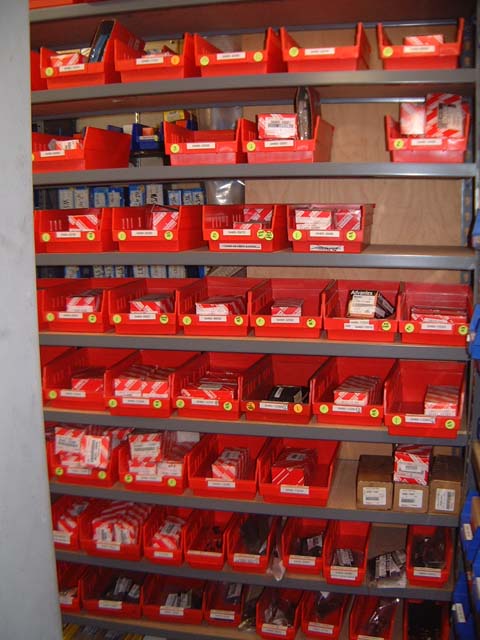 We use Denso spark plugs. Denso is OE for Toyota and an option for Honda. The other OE plug for Japanese cars is NGK. Both are excellent. We can’t afford to stock both, so we flipped a coin and went with Denso. We also stock some fuel injection components such as O2 sensors, mainly Denso and NTK (part of the NGK company). On the left side of the isle are timing belt parts for Toyota and Nissan. We always use Genuine timing belts. For waterpumps we use Genuine or OE, never OEM. For tensioners and idlers we use Genuine, NSK, and Koyo. NSK and Koyo are OE or OEM for most of the cars we work on. We keep Genuine Honda front brake pad kits on the back wall.

We only use Toyota parts as they are the least likely to cause poor performance or squeaking. There are two types of Toyota brake pads: Standard and Warranty. 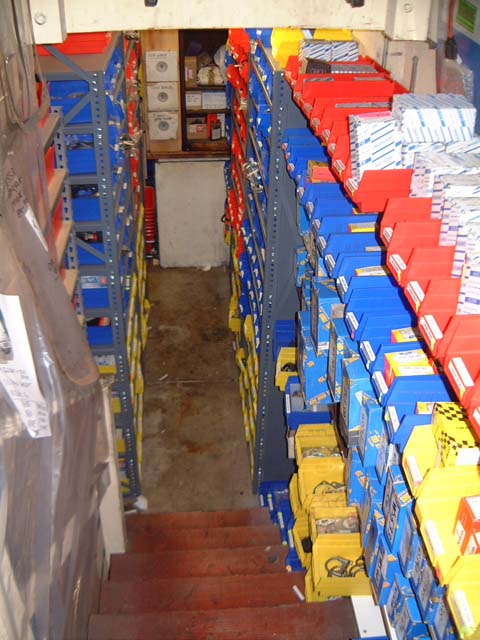 This confused us when we first saw it in the Toyota Fast Moving Parts Guide. Initially we figured the warranty pads must be sub par, for use in warranty repairs. Turned out it was the other way around; the warranty pads are more expensive and help to reduce squeaking. We carry the warranty pads whenever they are available, but, unfortunately, they are only available on very popular or newer applications. As your car gets to be older, you may just have to learn to live with the squeaking. Of course there are many other factors that affect brake squeak, but a detailed explanation will have to wait until I get around to writing a brake information page.

You may have noticed all of the bins are color coded. Granger only sells 3 colors of bins, so Honda and Acura are blue, Toyota and Lexus are red, and Nissan and Mazda are yellow (not that Nissan and Mazda are in any way related, we just have far more Honda and Toyota parts, so it made sense to give them each their own color. 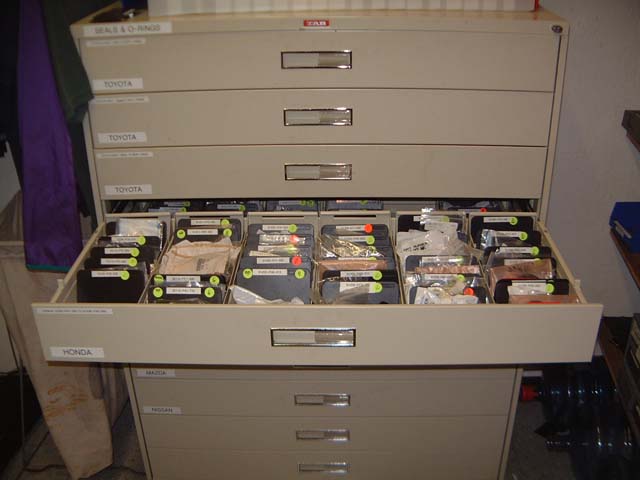 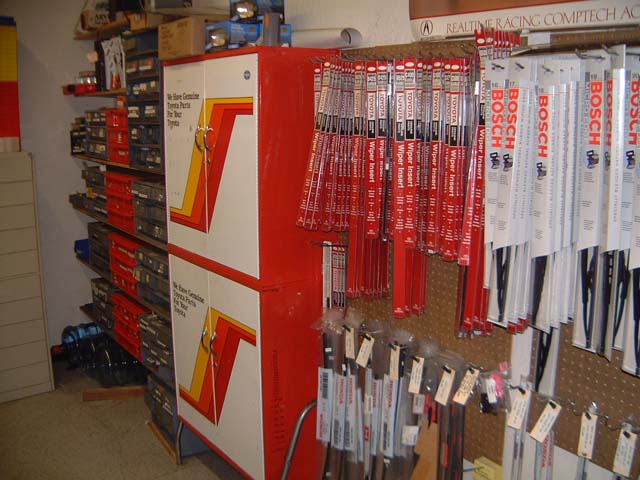 All of our timing belts are Genuine. All of the waterpumps are Genuine. The tensioners are either Genuine, NSK, or Koyo. NSK and Koyo are OE or OEM for most of the cars we work on. Any seal we touch is replaced with OEM or genuine new seals. 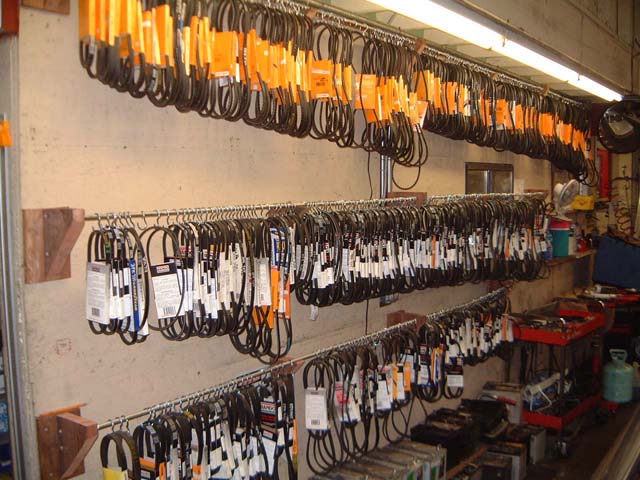 This is a belt rack I built for our drive belts. The belts are suspended from aluminum rods by “S” hooks (available from the hardware store) bent 90 degrees so that the belts hang sideways. The belts can slide along the rack. New inventory or overstock can be easily added without needing to move an entire row of belts over a hook. We stock primarily Bando and Conti belts. There are a few GoodYears here and there left over from emergency parts house buys (not that they are bad belts, just more common on American cars than Japanese).

Art’s Automotive has been in business for 35 years now, and computerized inventory systems have slowly grown to be commonplace in almost every industry around us, as we continued to do things as we always had. But the larger the business grew, the larger inefficiencies of using a manual system grew. A large part of the parts room redesign was the integration of a computerized inventory control system.

Here’s how it works:

All parts have a record. The parts record is like a folder in a file cabinet. Writen on the folder are all of the part numbers associated with the part (so when a part number is superceded you don’t lose use of old inventory), a part description (for the invoice), the default supplier of the part (so you, and the computer, know where to reorder the part), the default bin location (so you know where to find the part, the prefered manufacturer (so you know what brand you like to order), the part’s cost and list prices, and the minimum quantity and the restock quantity (once the stock level drops below the minmum, the restock quantity is automatically added to a purchase order. The image below is a screen cap from the shop management system we’re using In-GeniusShop Tools .

When a part is added to an invoice, it is removed from inventory and added to a pending purchase order list (picture below). This happens more or less in real time. Add a part to a repair order, it comes out of inventory and is shown as “on sales order 20871” or whatever the sales order number happens to be. If the part is deleted from the sales order, the part comes back into inventory. The default supplier on the parts record determines to whom the purchase order is issued. The purchase order can be printed and faxed and there is currently work being done on a direct link to WorldPAC Speed Dial. If you find that you want to change a default supplier or minimum stock quantily from the Purchase Order Screen, it’s no problem. Just double click the part and the Part Record comes up for editing. 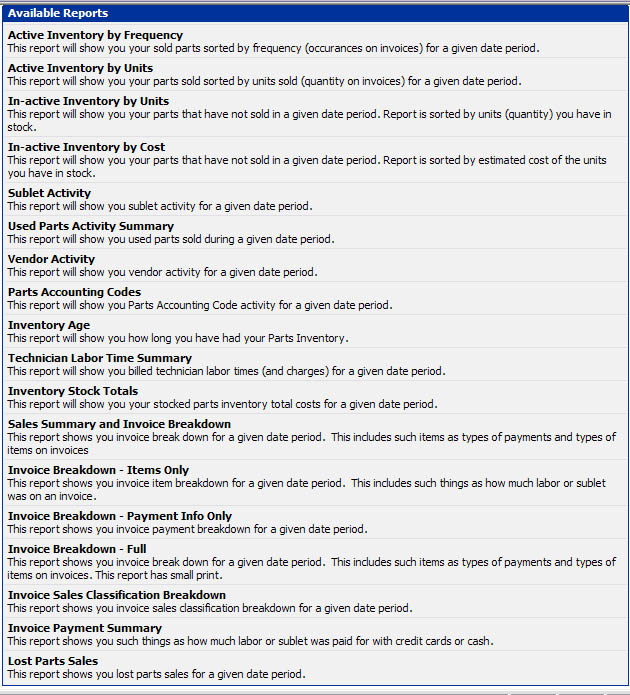 When the parts order arrives, the parts are “received”, or entered into inventory. On the screen below, we enter the vendor, the vendor’s invoice number, and our PO number. If there was freight on the shipment, we enter that as well. We use Part Records and Receivings for parts we don’t sell too (like shop supplies). It’s a handy way to track usage and compare the cost from different vendors.

After clicking the “Add” button or alt+a on the screen above, we enter the info for each part on the screen below. After entering the part number, everything else is filled automatically (description, quantity, cost, list, core charge, location, etc). The quantity is pre-filled with the quantity ordered, and the cost is pre-filled with the last cost from the last time the part was received. We always check these fields and change them when a part has been partially shipped or the price has changed. Knowing the last price we paid for a part is very nice, since a few suppliers will offer a low price to hook us, then try to bump the price after a few months. Luckily most of the part suppliers we deal with are excellent and fair (which is why we deal with them). Any of these items can be changed if needed. If the price has gone up, both the cost and the list price can by modified. If there’s no more room in the default location, we can note where we put the part so we can find is later. If we receive a part that has not been ordered before, a new Part Record will be added when the Receiving is processed. At first I thought entering parts into the computer would take a lot of time, but it really doesn’t. 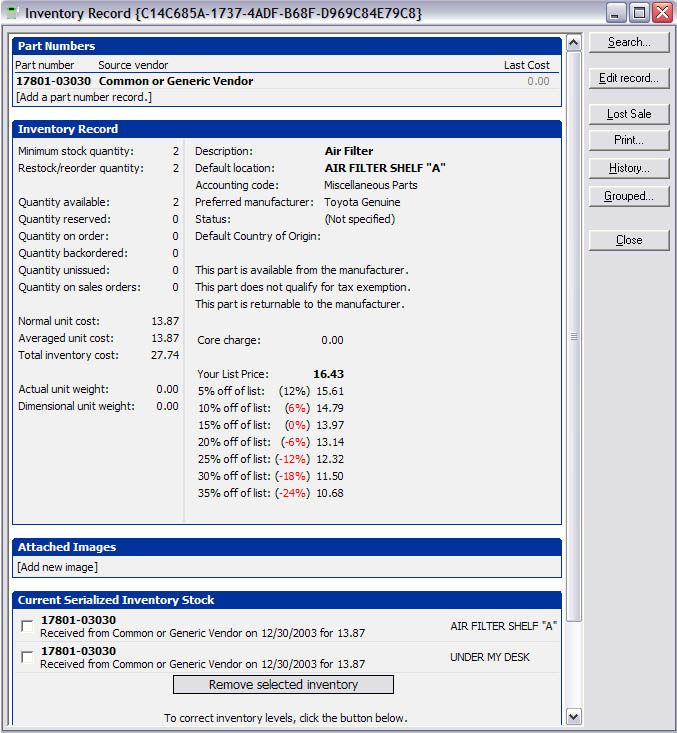 You may notice that the two stocked air filters in the above part record each have a different location. This is possible because each individual part inside a parts record has its own record. This record includes the date of purchase (so you know how long the part has been sitting on your shelf), from whom the part was purchased (so you know who is responsible for warranty), how much you paid for that individual part (this way if you get a special deal on a batch of parts, you can pass it along to your customers until you run out of the specially priced parts), and the location of the part (this way if there’s no more room in the default location, you can note where the part is, for example: “on the floor next to Paul’s desk” could be entered, and when the part is sold, to whom the part was sold and at what profit. If you have more energy than I do, you can even take a digital picture of the part and store it with the record, assign a serial number to each part, add core charges for reman parts, make some parts tax exempt and a bunch of other options.